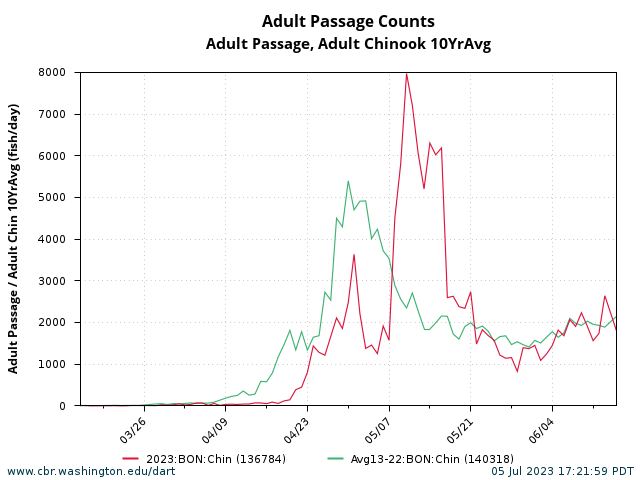 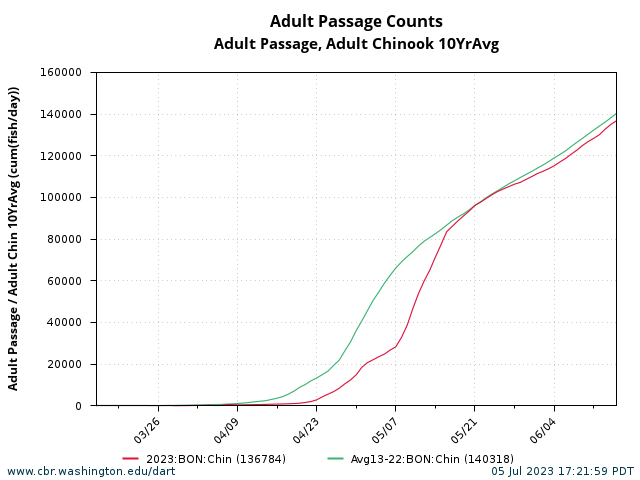 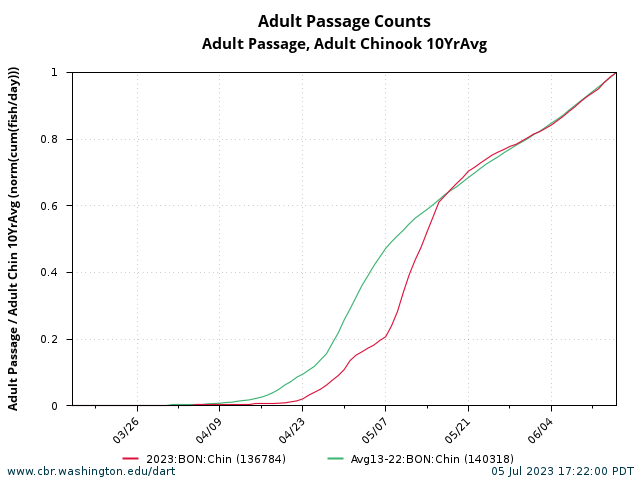 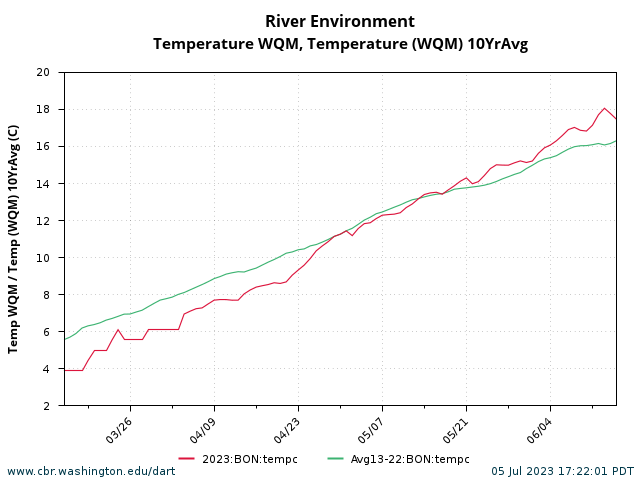 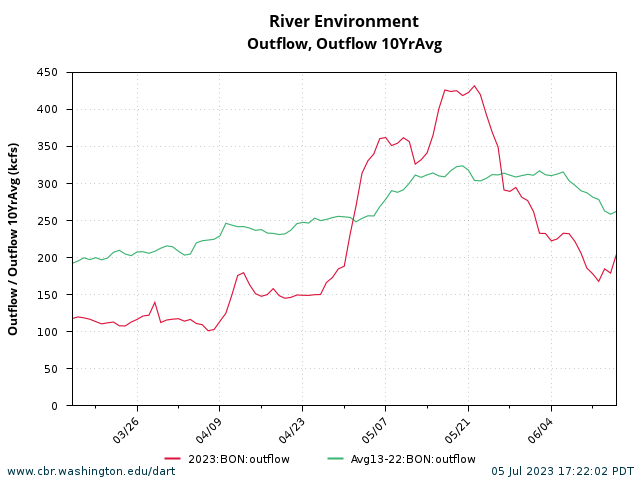 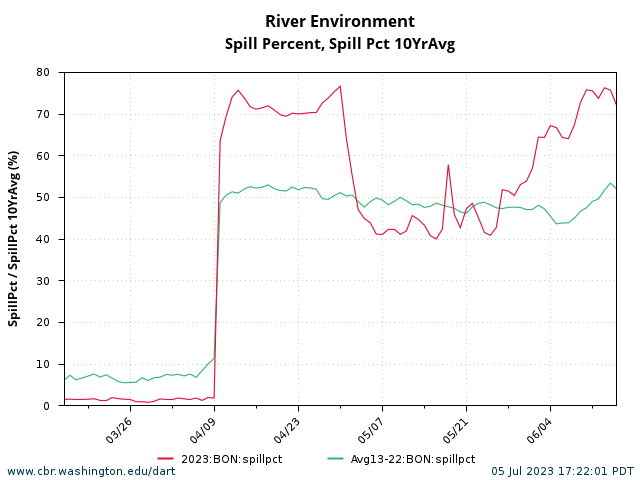 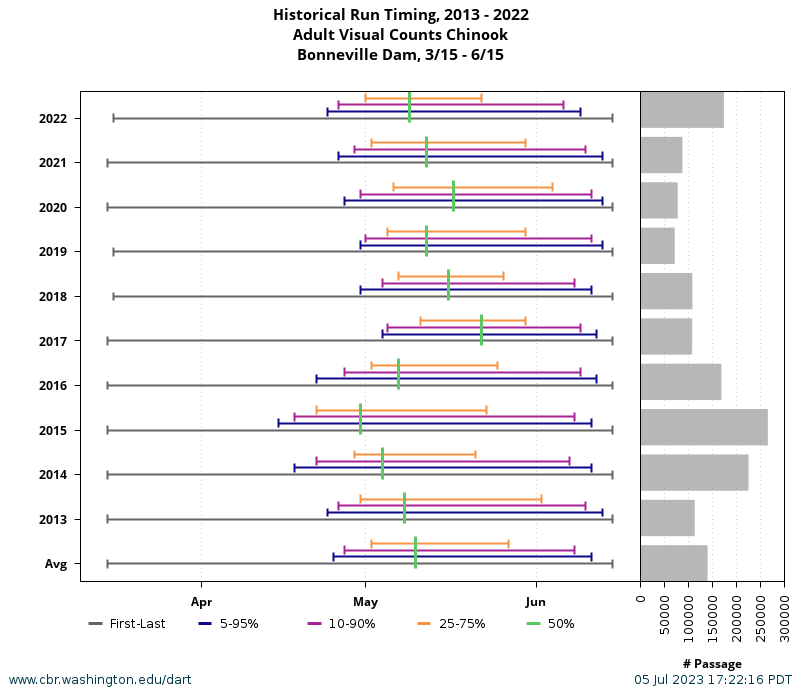 Inflow, Outflow, Spill, and Temperature (Scroll Case) data are collected at the project (dam). Spill Percent is calculated by DART from the Outflow and Spill values. Temperature (WQM), Barometric Pressure, Dissolved Gas and Dissolved Gas Percent are measured at Water Quality Monitoring stations in the forebay and tailrace of most projects and other key locations in the basin (prior to 1995, these data are from a variety of sources within the U.S. Army Corps of Engineers). Turbidity is measured in the forebay or in the fish ladders at a project. Elevation is measured in the forebay of a project.

Bonneville Dam, 18 July 2006: The USACE initially reported incorrect hourly Bonneville spillway discharge for 2002-2004. DART is reporting the USACE's Recalibrated Spillway Discharge at Bonneville for this period. The Water Quality reports for BON, CWMW, CCIW, and WRNO include the recalibrated spill at Bonneville.

Wells Dam, 13 August 2012: The DCPUD has requested the water temperature data reported as the "Wells Scrollcase Water Tempurature" obtained for DART from prepared USACE text files be removed as erroneous. The Wells project does not report scrollcase water temperatures. This data has been removed from the publicly accessible DART dataset.

June 5 - July 9, 2013: DART reported partial averages for outflow and spill from several Upper Columbia PUD projects. These values have been corrected to show the average of the complete day. We would like to thank the CCPUD for helping us correct this issue.

USACE Data Disclaimer: These data are furnished with the understanding that the Corps of Engineers makes no warranties concerning the accuracy, reliability, or suitability of the data for any particular purpose.

USACE Dams Video and Live Counting: From November through March, video tape fish counting occurs at US Army Corps of Engineers dams with fish ladders on the Columbia and Snake Rivers. Fish counting by video tape takes at least a few days to process: the fish counters have to make, collect, and read the tapes, and then submit their fish counts. DART retrieves and posts the data as soon as it is made available. On April 1, live fish counting resumes at all 8 Columbia River and Snake River Corps dams with fish ladders: from April through October each year for 16 hours each day, fish counters working at each fish ladder look directly into the fish ladders to count the fish passing by.

Lyle Adult Trap at Lyle Falls: Daily counts represent number of fish caught in the adult fish trap at Lyle Falls Fishway (Klickitat River RM 2.4). With the exception of some fish that are collected for hatchery broodstock purposes, the vast majority of these fish are returned to the fishway to continue migrating upriver after sampling. The counts do not include fish that ascended the natural waterfalls or fish that passed through the fishway on non-trapping days. Some unknown-origin fish are recorded during fish counting that occurs as fish are returned directly to the fishway without handling or sampling. Data is provisional and subject to change following review and validation. http://www.ykfp.org/klickitat/Data_lyleadulttrap.htm

Willamette Falls Video Counting: Fish counting through Willamette Falls fishway occurs at the main viewing window. Video cameras and time lapsed video recorders are used to record fish passage 24 hrs/day, 365 days/year. The ODFW schedule for reviewing the tapes is Monday through Friday. It takes most of the day to accurately review one day of fish passage on tape when the counts are high.

Bonneville Dam: Lamprey is the combined count from the fish counting windows at Bonneville, reported daily. LPS is the count from the Lamprey Passage Systems (LPS) at Bonneville. The fish counting windows and LPS are mutually exclusive. LPS are located at Bradford Island, Washington Shore and Cascades Island. LPS were opened in 2009 and counting started in June 2010. NOAA's LPS lamprey counts at Bonneville for 2011 are not available to the public until motion trigger images and data logger tallies can be compared to resolve the status of lamprey passage during data gaps and anomalous data series. This comparison is expected during the winter of 2011-12.

Wanapum Dam, 2014:There were no adult passage fish counts at Wanapum Dam in 2014 due to a fracture discovered on the spillway in February 2014. The Reservoir elevation was lowered to reduce stress on the structure. The lowered reservoir made the regular fish ladder facilities and counting equipment inoperable. GCPUD was able to make modifications for fish passage at the dam, but a count was not taken at the dam.

Wells Dam, Lamprey Research, 2007-2008: The Lamprey adult passage counts at Wells Dam are not reflective of actual run size during 2007-2008. Trapping, monitoring, and research efforts at Wells Dam artificially lowered the passage numbers for Lamprey; i.e., more fish would have passed without tagging and trapping efforts.

Chinook Run Dates: Chinook runs (referring to the season when adults migrate upstream) are based on run schedules by project as established by the U.S. Army Corps of Engineers and Yakima Klickitat Fisheries Project. Sp = Spring, Su = Summer, Fa = Fall

Calculating the 10 year averages: The ten year averages are calculated by DART for each calendar day of data at each project. For the current year and any given project/month/day, the data is summed from the previous 10 years and divided by the number of non-null data points available during that 10 year span.