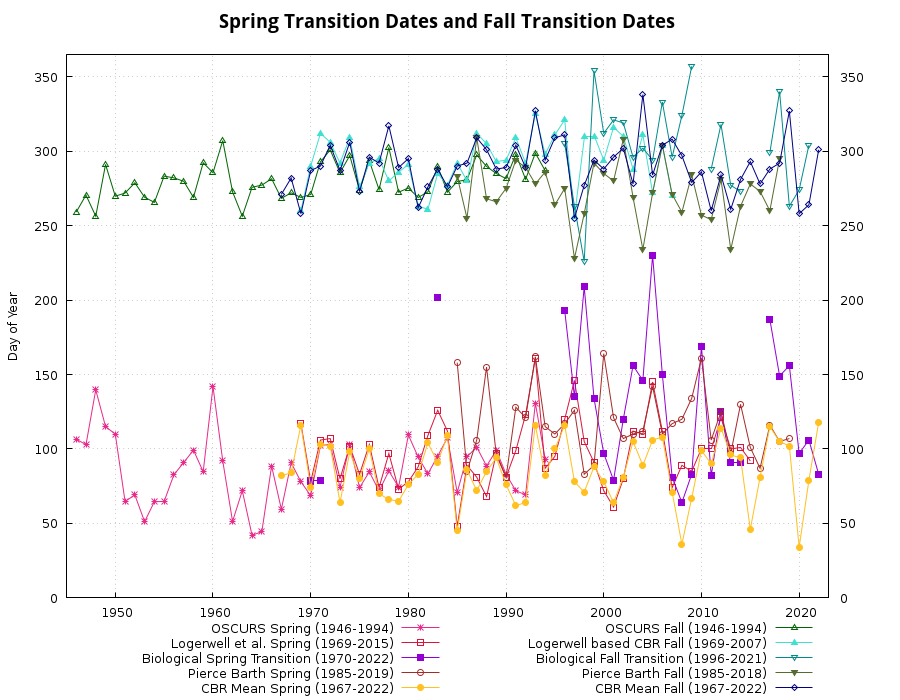 Each year, along the Pacific Coast of North American between San Francisco (38 North Latitude) and the Queen Charlotte Islands (52 North Latitude), the coastal winds switch from the southerly winds of winter to the northerly winds of summer producing a transition in wind called the spring transition. Conversely, the yearly switch back from the northerly winds of summer to the southerly winds of winter produce a fall transition. The summer winds, which occur after the spring transition and prior to the fall transition, are known to be favorable for upwelling a process that transports the nutrients to the ocean surface, feeding the near-shore food chain. Estimates of the transition dates were derived from smoothed synthetic winds computed by the ocean surface currents model OSCURS (Ingraham and Miyihara 1988), which used daily sea level atmospheric pressure fields for years 1946 to 1994 as input. The spring and fall transition dates were calculated for the latitude of the Columbia's mouth (46 deg 12' North Latitude).

The dates of the spring and fall transitions contained on the web page should be considered provisional. They are values which are approximations to the true spring and fall transition dates. The estimates depend on the degree and type of smoothing used on the synthetic winds derived from OSCURS. Neither NOAA nor the University of Washington is responsible for any misuse of these data.

Transitions dates contained on the web page should be considered provisional. They are values which are approximations to the true spring and fall transition dates. Neither NOAA nor the University of Washington is responsible for any misuse of these data.

Hooff, Rian C. and William T. Peterson. 2006. Recent increases in copepod biodiversity as an indicator of changes in ocean and climate conditions in the northern California current ecosystem. Limnol. Oceanogr. 51:2042-2051.

The biological spring transition date is the day of a biweekly Newport Research Station research cruise at hydrographic baseline station NH 05 off Newport, Oregon when copepods sampled in plankton nets cluster out as a northern (cold-water) community (Peterson and Keister, 2003). This date is a useful indicator of salmonid feeding conditions because it marks the first appearance of the kind of food chain that coho and Chinook salmon seem to prefer, that is one dominated by large, lipid-rich copepods, euphausiids, and juvenile forage fish. Taken from: Peterson et al. (2006).

Similarly the biological fall transition date is the last time in a particular year when the "cold water copepods" were found in the plankton samples (William Peterson, pers. comm.).

The estimates of biological spring transition were developed and compiled by Dr. William T. Peterson.

Dates shift around with updates as the data are based on a hierarchical clustering of the entire copeopod data set (n = 440 samplings at the baseline station five miles off Newport, from 1969-present). Whenever new data are added to the data set, the clustering algorithm is re-run and dates will jump around between "winter" and "summer".

Why are the "biological" spring transition dates so different from the others? The answer is as follows: the physical spring transition means that winds have begun to blow from the north and the coastal currents have begun to flow to south (which is why sea level drops). Although this event marks the beginning of spring, there is a time lag after the physical transition before the spring zooplankton are advected into the area. This is an important consideration because the winter zooplankton, being sub-tropical species, are a poor quality food resource (they are small and have very low lipid content). The spring zooplankton on the other hand are "northern" species whose home is the coastal waters of the Gulf of Alaska; they are relatively large and lipid-rich thus have a high bioenergetic content. Since these animals are residents of waters well to the north of Oregon, it takes several weeks before they are advected south to waters off Central Oregon. Thus, the time lag between the beginning of upwelling and the appearance of zooplankton that contribute to high productivity.

Dr. William Peterson requests the data not be used for publication without his consent.

Alongshore wind stress cumulative from the spring transition represents energy input into the upwelling system over the course of each season. This has been found to be strongly correlated with a number of different upwelling metrics (Pierce et al., 2006), eg. NH-line surface-layer temperature (0-30m).

Wind stress here is derived from observed winds at Newport, Oregon, using the method of Large and Pond (1981). The hourly data are low-pass filtered to remove diurnal variations. The spring and fall transitions (Huyer et al., 1979) are estimated for each year from the alongshore wind stress record, using a CUSUM algorithm for change-point detection (Page, 1954; Gustafsson, 2000). The significance (95%) of these two mean-shift change-points within each year's time series is confirmed using bootstrapping, as suggested by Hinkley and Schechtman (1987).

We hope that researchers will find it useful to compare their own upwelling-related data to the general development of upwelling represented by this cumulative wind stress product. Plots and data are available: damp.coas.oregonstate.edu/windstress/.

The method is the same as that used in Logerwell (2003) to estimate spring transition dates.

In most years the time series agree and the date is easy to pick. In other years the signals do not point to a single transition and some judgment must be made. Thus, although the model allows selection of the date, it does not form a completely objective and automated system for choosing that date.

Transitions dates contained on the web page should be considered provisional. They are values which are approximations to the true spring and fall transition dates. The University of Washington is not responsible for any misuse of these data.

Pacific Fisheries Environmental Laboratory publishes indices of the intensity of large-scale, wind-induced coastal upwelling and alongshore transport at standard locations on a monthly basis. The CBR Mean method uses data from 1967 to the present for three locations along the Pacific Northwest coast: